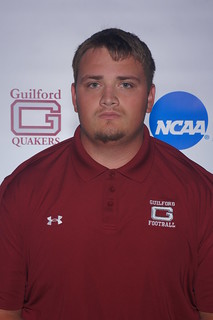 The all-district squads are comprised of football students from NCAA Division III institutions in the 10-state area from Virginia to Missouri. Nominees were starters or key reserves of sophomore academic standing or above who maintained at least a 3.3 grade point average.

Setzer, a 6-1, 275-pound offensive lineman, has played in all eight of Guilford’s games this season and started four. He started the year as a reserve, but took over for injured starter Drew Milot in week two. Setzer contributes to an offensive line that protects for Division III’s fifth-rated passing offense (342.9 ypg.) and the eighth-best total offense (509.3 ypg.). The Quakers stand 23rd among national leaders in fewest tackles for loss allowed (4.25 per game).

Coach Chris Rusiewicz’s Quakers are 7-1, 4-1 in the Old Dominion Athletic Conference (ODAC), and off to their best start since 1994. Guilford enters Saturday’s game at Hampden-Sydney College tied atop the ODAC standings with the Tigers and Emory & Henry College. Kickoff at Lewis C. Everett Stadium in Hampden-Sydney, Virginia, is set for 1:00 p.m.