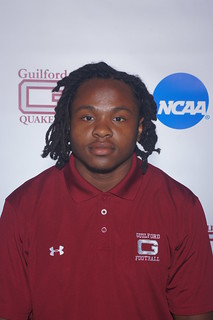 The contest will be played before a collection of professional football scouts Sunday (12/7) at 10:00 a.m. at Ocean Bank Field at Florida International University Stadium in Miami. It will be streamed live on line at www.SFSN.tv. Film from the contest will be delivered to each National Football League (NFL) team by NFL Films.

Stevenson, a 5-11, 200-pound safety, became Guilford’s first recipient of the Old Dominion Athletic Conference’s (ODAC) Lou Wacker Defensive Player of the Year Award last month. He was only the third Quaker tabbed to the American Football Coaches’ Association’s (AFCA) All-America Team last season and will likely repeat the honor after compiling a career-high 92 tackles, four interceptions and five pass breakups in 2014. He ranked fourth in the ODAC in tackles and fifth in interceptions per game. The team captain becomes Guilford’s first defender tabbed to three First Team All-ODAC units and joins Junior Lord as the second Quaker so honored.

Stevenson had five games with nine or more tackles this year, including a 22-stop, one-interception performance versus Washington and Lee University that clinched his third career ODAC Defensive Player of the Week honor, plus a spot on the D3football.com Team of the Week. Stevenson averaged 5.8 yards on 11 punt returns this season and for his career, ranked fourth among Guilford’s all-time best in punt return average (8.1) and interceptions (14).

Stevenson helped coach Chris Rusiewicz’s Quakers to a share of first place in the ODAC standings with a school-record 5-2 mark. The team’s 8-2 overall record matched the best in school history and was Guilford’s first since 1997.