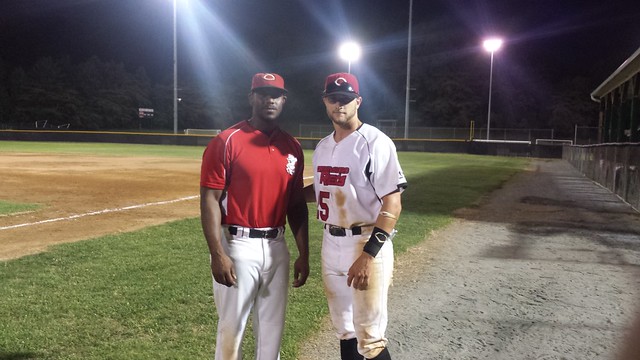 Game Five in Best-of-Five with winner moving on to Round Three of the American Legion Area III Playoffs…
Post 45 Randolph County 9, Davidson County 6
This is the score(DC 9, RC 6) that was being posted at WKXR.com, but they also had Post 45 meeting Rowan County in Round Three on Sunday….Sort of confusing here….Got the word this morning from the Lexington Dispatch and the final was, Post 45 Randolph County 9, Post 8 Davidson County 6…Post 8 managed to score two runs in the top of the ninth from Christian Dix(Northwest Guilford HS/Brevard) and Michael Garvey Jr.(Northwest Guilford HS/GTCC), but would come up three runs short at 9-6 and end its season with an overall record of 17-13. The Randolph County Post 45 vs. Rowan County series begins on Sunday and in the other Area III semifinal will see Post 81 Eastern Randolph vs. Post 87 High Point HiToms…WKXR 1260AM doing a great job on their American Legion Baseball coverage with Tony Wright at the helm…..

In game one the story was simple; hot bats for the Copperheads and slow offense for the HiToms.

However, in game two the script was completely rewritten when runs for both teams were hard to come by thanks to lights out pitching from the mound by both teams.

The biggest play was an Alec Paradowski (Wofford) three run home run in the bottom of the sixth to propel the HiToms to the 3-0 win.

Five HiToms travel to Florence, South Carolina Sunday morning for the All-Star weekend and are not back home till Wednesday (7/15) when they host the Forest City Owls at 7:00 p.m.