GREENSBORO, N.C. – Guilford College’s Tyler Hunt (Gibsonville, N.C./Eastern Guilford) is one of 41 student-athletes named to the 2015 Fred Mitchell Award Watch List. The honor is presented annually to the college football place-kicker with demonstrated excellence on the field and in the community. Hunt, a senior, is the first Quaker named to the watch list in the Mitchell Award’s seven-year history. 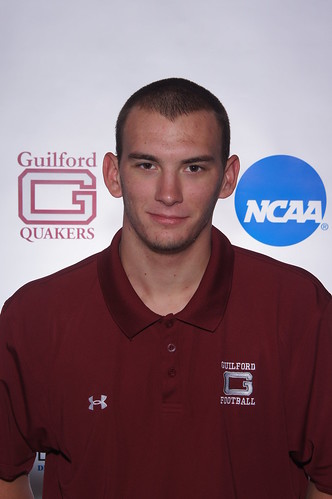 Hunt is weeks away from starting his fourth and final season with the Quakers. He has filled both punting and place-kicking duties in his first three years and garnered First Team All-Old Dominion Athletic Conference (ODAC) honors at both positions. He made seven-of-11 field goals and all 52 points-after touchdown (PAT) in 2014 for 73 points. His 7.3 points per game average ranked fourth in the league, tops among kickers, and he set school season records for PATs and PAT accuracy. Hunt had a long field goal of 43 yards a year ago and averaged 59.6 yards on kickoffs with 24 touchbacks. A 2015 Division III preseason All-American according to The Sporting News, Hunt ranked third in the ODAC in field goals per game (0.7) and field goal percentage (.636). He needs two PATs and nine field goals to set the Guilford career records.

Hunt, a sport management major, participates in a ‘Peanut Butter Ministry’ at a local church spending around three hours per week during the offseason making and delivering sandwiches to those in need. He also works with kickers and punters at free clinics in central North Carolina and regularly participates in Guilford’s Freshman Move-In Day and other team volunteer projects.

Mitchell Award winners are chosen by a selection committee that includes at least 14 former college or National Football League place-kickers based. The Award’s Watch List is released in August, top performers are recognized monthly during the college football season, and the winner (who is not required to be on the Watch List) is announced in mid-December. The award winner’s institution receives scholarship funds. The Mitchell Award trophy is presented in February at the National Football Foundation Chicago Metro Chapter’s awards ceremony at Halas Hall.

Hunt and his teammates return to campus Aug. 12 in preparation for the 2015 season, which begins Sept. 5 with the 19th annual Gate City Soup Bowl at crosstown-rival Greensboro College.