GREENSBORO, N.C. – Four Greensboro high school students were awarded the Bill Lee Scholarship during the news conference to announce seeding and first-round pairings for the 40th anniversary HAECO Invitational presented by NewBridge Bank, the Greensboro Sports Council announced today. The Council has awarded these $2,000 scholarships during its annual high school basketball tournament since 2001. The 40th anniversary HAECO Invitational is set for Dec. 26, 28 and 29, 2015. 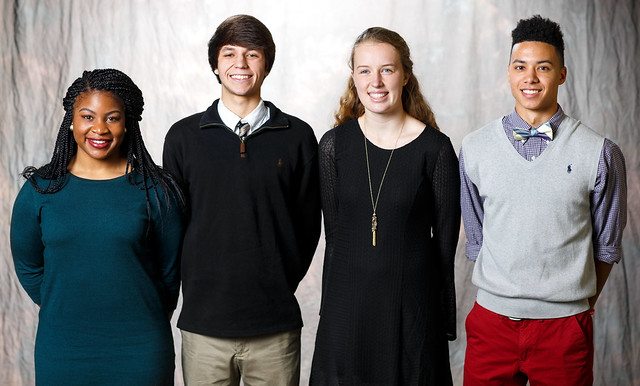 Northwest Guilford’s Jaylen Gore is a three-year starter on the basketball team, a team captain and was named to the HAECO Invitational all-tournament team last year. He is a member of the National Honors Society taking honors and AP level classes all four years of high school, and he maintains a 3.7 grade-point average. He works with the Rising Stars Basketball Camp for elementary and middle school-age children.

He is interested in a career in sports marketing or physical therapy and hopes to attend Guilford College, Appalachian State or Catawba College.

Jeffrey McGowan is a team captain and a two-year letterman at Page High School. He is an AP Scholar and a member of the National Honor Society; he carries a 4.43 grade-point average. He is a member of the Student Council, Young Life, Key Club and runs varsity track. He has volunteered for Cystic Fibrosis, the Young Life camp retreat and Boy Scouts of America. He is interested in a career as a sports analyst, a venture capitalist or a Dentist and hopes to attend the University of North Carolina at Chapel Hill, the University of South Carolina or NC State University.

Leigh Ramsey has played varsity basketball at Grimsley High School for three years and is a team captain this year. She works with National Honor Society Club Tutoring, the debate club and the Spanish club among others. She has been a scholar athlete in each of the last three years and carries a 5.28 grade-point average. She volunteers at Our Lady of Grace, the YMCA and Greensboro Urban Ministry among many others. She is considering a career in Chemical Engineering or Materials Science Engineering and hopes to attend Columbia University, NC State University or the University of Virginia.

Northern Guilford’s Lasha Seaton is a four-year varsity basketball player and has been academic all-conference for the last three years. She won the team’s highest GPA award last year, and she also won the “hustle award.” She is a member of the National Honor Society, the National Beta Club, the 4.0 Club and she is an AP Scholar. She carries a 4.65 grade-point average. Among her volunteer activities are the Lindley Recreation Center Fitness Fair, Calvary Christian Center Missions, Beta Club Highway Cleanups, Maple Grove Baptist Church helping feed the homeless and the national honor society Peer Tutor Program. She is considering a career in the Military or the CIA and is interested in attending the United States Military Academy at West Point, the University of North Carolina at Chapel Hill or Duke University.

The winners will receive their formal awards on December 29 during a special ceremony during championship day at the HAECO Invitational.

Bill Lee was a Greensboro native and resident who was a major supporter of local sports. He was deeply involved with Greensboro’s minor league baseball efforts, basketball and golf. The Bill Lee Memorial Scholarship was established by the Greensboro Sports Council following Lee’s death in 2001. Recipients are nominated by the schools participating in the HAECO Invitational each year, and the Greensboro Sports Council awards the scholarships. Each nomination is considered with the following criteria: 40% academic, 40% athletic and 20% civic.

The HAECO Invitational presented by NewBridge Bank is an annual high school basketball tournament in Greensboro, N.C. Founded in 1976 as the Little 4 Invitational, the tournament features men’s and women’s teams representing eight Guilford County high schools playing at the Greensboro Coliseum Complex. Tournament proceeds are donated to local charities and the participating schools; the HAECO Invitational is planned and implemented by the Greensboro Sports Council. For more information, please visit www.HAECOInvitational.com and follow the event on Twitter: @HAECOinvit.
# # #