FOREST, Va. – Guilford College’s Will Freeman (Rockingham, N.C./Richmond Senior) earned the Old Dominion Athletic Conference’s (ODAC) Men’s Basketball Player of the Week Award Monday. The senior earned the prize for the first time in his career and is the first Quaker so honored this season. 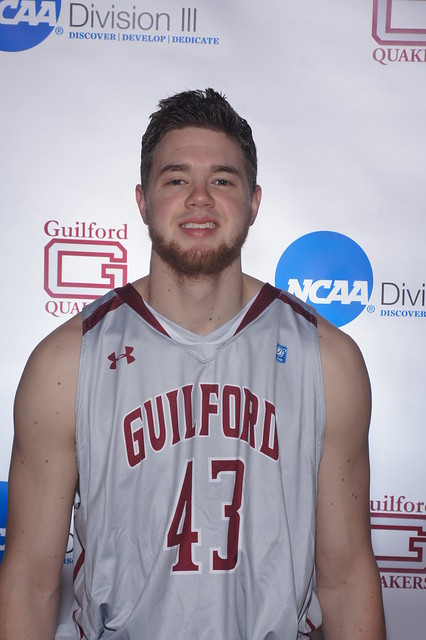 A 6-5, 215-pound center, Freeman averaged 16.5 points and 6.5 rebounds per game in the Quakers’ 2-0 week. He shot just under 61 percent from the floor and averaged 23.5 minutes per game. Freeman hit his second late game-winning shot of the season in the Quakers’ 61-60 triumph at Emory & Henry College January 13. His basket with three seconds left in regulation marked the game’s final scoring play and gave him a club-best 15 points. He also had six rebounds and a block in the game. Four days later Freeman scored a season-high 18 points on eight-of-12 field-goal shooting in the Quakers’ 81-69 win over Shenandoah University. He collected seven rebounds and a steal in Guilford’s fourth-straight victory.

Freeman leads Guilford and ranks 14th in the ODAC with 13.1 points per game. He shoots an even 50 percent from the floor (75-150), which stands 16th among conference leaders. His.5.8 rebounds per game average sits 15th in the league and his 15 blocks are sixth. Freeman has 11 games with 10 or more points, including three 18-point outings, and collected the Most Valuable Player award at both the Guilford College Classic in November and the Guilford College Holiday Classic in December.