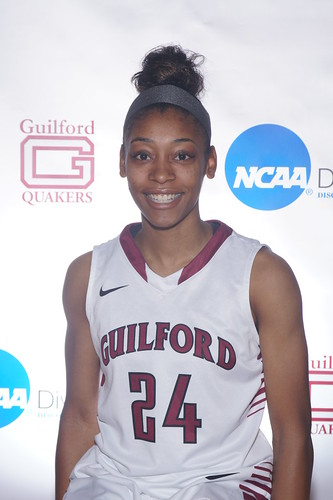 Weatherly, a 5-10 forward, scored 23 points on back-to-back nights in Guilford’s two ODAC road wins last week. She posted her team-leading ninth double-double of the season with 23 points and 11 rebounds in Guilford’s 70-62 win at Roanoke College January 20. Weatherly made nine-of-15 shots from the floor, including two three-pointers, and made seven steals in the win. The following night Weatherly added nine rebounds and one steal to her 23 points in the Quakers’ 66-63 victory at Randolph-Macon College. She averaged 23 points, 10 rebounds and four steals per game, and shot over 58 percent from the floor in Guilford’s 2-0 week.

Weatherly leads the Quakers and ranks among the ODAC’s top-seven in scoring (16.0 ppg.), rebounding (9.8 rpg.), field-goal percentage (.466) and steals (3.31 spg.). She tops the league and stands 35th in NCAA Division III in steals per game. Her nine double-doubles and 9.8 boards per game are second in the conference. She has 13 games with 10 or more points and nine games with 10 or more rebounds.

Weatherly has helped coach Stephanie Flamini’s team to its best start since the 2001-02 campaign. Winners of four straight, the Quakers (14-2, 8-1 ODAC) have a half game lead in the ODAC standings over Lynchburg College, which visits Guilford this Wednesday (1/27) for a 7:00 p.m. contest.