ELON, N.C. – Nicole “Colie” Dennion ‘16, one of the most dominant women’s soccer players to ever wear an Elon jersey, died Nov. 5, 2016, following a long and courageous battle with Ewing’s sarcoma, a rare childhood bone cancer. She was 22 years old. 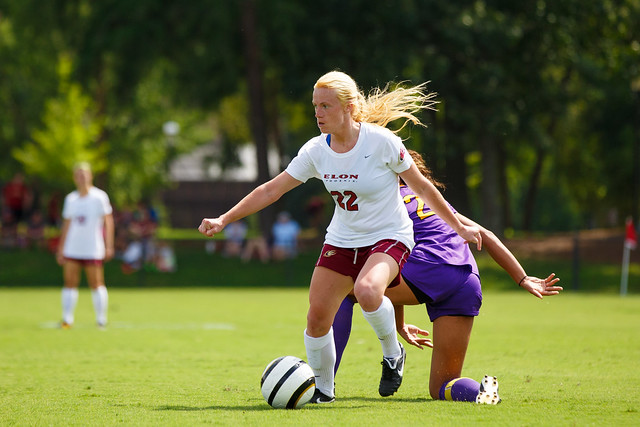 Elon will provide more information when it is available on services, condolences and memorials for Colie.

“We are deeply saddened to learn the news of Colie’s passing. She inspired the entire Elon community with her fierce and courageous spirit in competition and in the fight against her disease,” said Elon Athletics Director Dave Blank. “Today her family, teammates, coaches and friends are in our prayers. We will all miss Colie, but will never forget the impact she made on our university, the Phoenix family and the many lives she touched.”

As a sophomore, Dennion was named the 2013 Southern Conference Women’s Soccer Player of the Year after leading the league in goals with 15 and helping the Phoenix reach the finals of the SoCon Tournament. She went on to earn NSCAA All-Southeast Region accolades and was named to the SoCon All-Academic Team following her breakout season. Dennion was the recipient of the Stein H. Basnight Outstanding Athlete Award, Elon’s highest athletics award, later that year. The award is given annually to the most outstanding male and female athletes of the year.

Despite having her soccer career cut short due to her diagnosis in February of 2014, Dennion completed cancer treatments while still taking on a full course schedule. During the moments between school and treatment, she also worked as a physical therapist’s aid and coached a girl’s club soccer team.

The National Association of Academic Advisors for Athletics selected Dennion as the recipient of the Wilma Rudolph Student-Athlete Achievement Award in 2016. The award honors student-athletes who have overcome great personal, academic, and/or emotional odds to achieve academic success while participating in intercollegiate athletics.

Additionally, the Colonial Athletic Association selected Dennion as the recipient of the 2016 John H. Randolph Inspiration Award. The award recognizes individuals who, through strength of character and human spirit, serve as an inspiration to all to maximize their potential and ability for success. Former CAA Commissioner Tom Yeager presented Dennion with the award at the Elon Athletics Awards Banquet on May 10.

Prior to receiving the award, Dennion wrote an essay about her experience. In the essay, Dennion said:

“I believe I was meant for this journey – I was diagnosed with Ewing’s sarcoma and I was born and raised in Ewing, N.J. The chromosome mutation for Ewing’s happens on chromosome 22, my jersey number for Elon was No. 22. This may be a coincidence, but I believe it was a sign that I was meant for this journey and I can only hope that my story can bring inspiration to other people fighting battles of their own.”

Dennion returned to campus last October and was recognized during the Elon women’s soccer team’s Senior Day celebration. She graduated from Elon with a degree in exercise science in May of 2016.