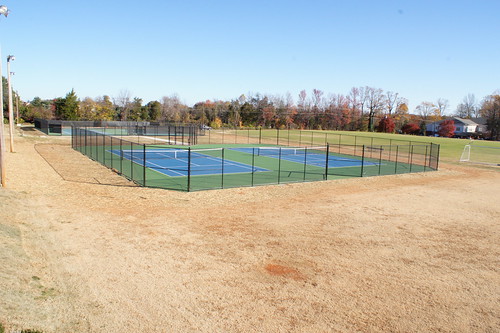 The addition gives Guilford 10 courts in the Dorothy Ragsdale McMichael ’37 Centennial Class Courts complex and enables the Quakers to host tournaments on campus.

“The new tennis courts funded by the Bluethenthal gift will make a big difference in the experience of our current tennis players and many students yet to come. Truly this gift is an investment in the lives of our students,” said Guilford President Jane Fernandes.

Fernandes was one of four featured speakers at the dedication, which included remarks from Guilford Vice President for Advancement Ara Serjoie and Guilford Major Gifts Officer Eric Hart. One of Bluethenthal’s three children, Tony, spoke on behalf of the family. He reflected on his father’s affection for Guilford, which stemmed his friendship with former Guilford president Grimsley Hobbs. The two met in high school at the George School in suburban Philadelphia. Arthur, a Greensboro business and community leader, passed away in 2013 at the age of 89. He was a three-sport standout at the George School and played tennis into his later years.

“Our family looked for an opportunity to honor my father in a way that will make an impact,” Tony Bluethenthal said. “I think he would be very pleased that we chose to make the gift to construct new tennis courts at Guilford College.”

After the remarks, guests moved to the new courts where Arthur’s wife, Joanne, cut a ceremonial ribbon to open the facility. Guilford seniors Mason Church and Nora Prokosch made the ceremonial first serves on the new courts.