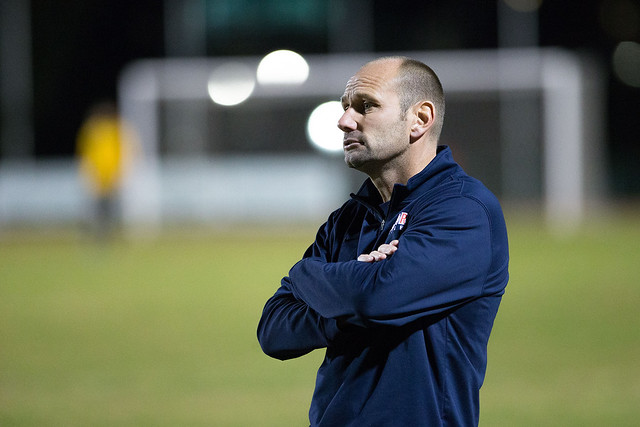 “Marc Reeves has experienced a tremendous amount of success at every level of his coaching career and we are thrilled to welcome him to the Elon family,” Blank said. “Marc possesses a strong commitment to the full experience of the student-athlete and has demonstrated that he knows what it takes to achieve success at the highest level. We are excited about his enthusiasm and confident he is the right coach to continue the upward trajectory of the Elon men’s soccer program moving forward.”

In seven years at Radford, Reeves led the Highlanders to an overall record of 75-43-20 (.616) including a 42-15-6 (.682) mark against conference opponents. He led RU to back-to-back appearances in the NCAA Tournament in both 2015 and 2016 and three straight Big South Conference regular season titles.

“I am truly thankful to Dave Blank, President Lambert and the search committee for the opportunity to lead Elon men’s soccer,” Reeves said. “I have great respect for the program’s previous coaches, especially most recently Chris Little and Darren Powell. Both are incredibly high caliber coaches of great character and they have left a very strong program in place that we will look to build on for the future. My family and I are eager to join the Elon University and become a part of its exceptional community.”

In his seven years at Radford, Reeves helped 41 players achieve All-Big South laurels and was honored with Big South Coach of the Year accolades in both 2015 and 2016. Reeves’ players also performed in the classroom during his tenure at Radford, as six earned Academic All-Big South honors.

“The CAA is a fantastic league with some tremendous teams and coaches that I truly respect,” Reeves added. “I look forward to competing against them and maximizing Elon soccer’s full potential.”

In 2016, Reeves led the Highlanders to a 14-4-2 overall record, including a 7-1-0 mark against league foes. The Highlanders captured the Big South Tournament title with a 1-0 shutout against Longwood, marking the team’s 10th clean sheet of the season. Radford earned an NCAA Tournament bid for the fourth time in program history, as eight players were named to the All-Big South team.

In 2015, Reeves’ Radford squad ended the year as one of the top offensive threats in the country. Radford led the Big South with 44 goals, ranking in the top-20 nationally. Radford’s defense was just as impressive, only allowing four goals in Big South play – the lowest recorded in the league – and ending the year with nine clean sheets.

Reeves earned 2014 Big South Coach of the Year honors, as the Highlanders posted a 12-5-3 overall record and an 8-1-0 mark in conference play. It was the fourth straight winning season for the Highlanders, which has not been done in nearly 20 years.

Reeves came to Radford after 11 seasons at St. John’s, including the last four (2006-09) as the program’s associate head coach.

The Gillingham Dorset, England, native was part of an extraordinary run of success at St. John’s. The Red Storm reached the NCAA Tournament Round of 16 in eight of his ten seasons, including a national championship appearance in 2003, three trips to the national semifinals (2001, 2003, 2008), and four national quarterfinal appearances (2001, 2003, 2004, 2008).

A midfielder, Reeves played for St. John’s for one season in 1998. He was part of the team that won the Big East Championship and advanced to the NCAA Elite Eight. Reeves went on to earn a masters degree in secondary education and began his coaching career in 1999. Prior to arriving at St. John’s, Reeves graduated from Brunel University (Middlesex, England) in 1997 with an upper second degree in sports science.

Reeves has a USSF A National License and a NSCAA Advanced National Diploma.

Reeves and his wife Susanne have three children: Robert, Olivia and Jackson.