GEMCAP Development, Carolina Investment Properties, and the Greensboro Grasshoppers are pleased to announce the development of a nine-story, 111,869 square foot class A office project in downtown Greensboro. 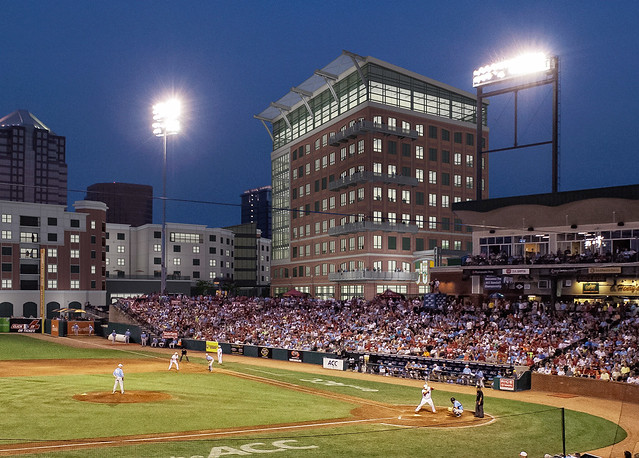 The project will be located at the Northwest corner of Eugene and Bellemeade Street, a parcel of land located just outside the gates of the First National Bank Field, home of the Greensboro Grasshoppers. The land will be purchased from the Grasshoppers organization with the building’s design, accessibility and major features to be integrated into the existing ballpark. The nine-story building will feature retail-oriented space on the first floor with eight floors of office.

Tuggle Duggins P.A., a prominent law firm in Greensboro, will be a major office tenant in the project, occupying the top floors of the building.

“Tuggle Duggins is committed to being a presence in Downtown Greensboro and a part of this exciting project and key milestone in our city’s office market”, says Nathan Duggins, Managing Partner with Tuggle Duggins P.A. Our new office is part of the future vision of our firm and will play major role in the attraction and retention of new talent to the firm.”

Coleman Team with Linville Team Partners has served as a lead developer on the project and will oversee the ongoing leasing of the office space. The class-A office building will have 65,000 square feet available for lease on floors 1-6 with each floor consisting of approximately 12,700 square feet. A key feature will be a 1,200 square foot shared space with a balcony overlooking the ballpark for common use among all building tenants. Parking will be available for building tenants and visitors in the planned City of Greensboro parking deck to be built directly across from the building’s entrance on Bellemeade Street.

The project design will retain much of the ballpark existing design elements, including brick masonry façade, arched openings and slope roof design. The building will also have balconies for tenant use. The project will establish a prominent new ballpark entrance with emphasis on public gathering space along Eugene and Bellemeade Streets for tenants and ballpark patrons.

“The Greensboro Grasshopper organization is excited about the energy that this mixed-use project adds to the overall stadium experience” says Greensboro Grasshoppers President and General Manager Donald Moore. “The office and retail-oriented aspects of this project complement the existing baseball and entertainment operations in First National Bank Field, and the project’s design integrates well with the existing stadium.”

“This is a tremendous new investment in downtown Greensboro. The development team paid close attention to complement the existing ballpark and create an innovative office tower that will change the skyline with Class A++ office and life space.” stated Zack Matheny, President of Downtown Greensboro, Inc.

“A unique aspect of this building’s development has been the collaborative nature of initial planning and concept development.” says Robin Team, President of Carolina Investment Properties. “Carolina Investment Properties, GEMCAP, and Linville Team Partners have each contributed development expertise that provides for the unique design, location and tenant centric aspects of this exciting new mid-rise office building.”

The project architecture team is a joint venture of Moser Mayer Phoenix, PA and West & Stem Architects. Landmark Builders will be the general contractor. Linville Team Partners is the commercial real estate firm marketing and leasing the remaining office space. A key element in the success of this facility will be the local nature of the talented team assembled to design and construct the building; this project team has worked together many times to develop a number of the most notable new facilities in the Piedmont Triad over the past several years.

Construction is scheduled to start in September, 2017 (immediately following 2017 baseball season), with completion in the fall of 2018.

GEMCAP Holdings is a real estate development company based in the Piedmont Triad region of North Carolina. GEMCAP has a strong presence throughout the Carolinas with successful developments that include office, retail and mixed-use projects. A recent GEMCAP project is the redevelopment of a 70,000 square foot residential condo and retail project in downtown Winston-Salem.

The Greensboro Grasshoppers are a Single A affiliate of the Miami Marlins and have welcomed over 4.8 Million fans since opening First National Bank Field in 2005. The Grasshoppers won the South Atlantic League Championship in 2011 and have won numerous operational awards over the years including the Bob Freitas Award as the most outstanding Single A franchise in the country in 2008.