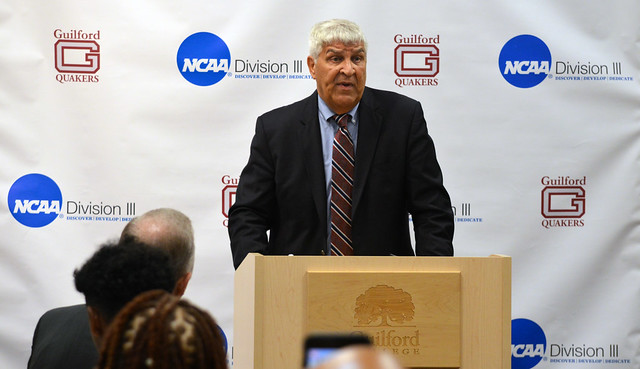 “We will create a singular, full-time director of athletics who can focus solely on the ever-expanding demands that come with leading and serving our over 400 student-athletes,” Fernandes said. “I have a great appreciation for Tom’s leadership and what he’s accomplished in his dual roles over the last decade, but it’s simply too much to expect him to continue to carry that double responsibility.”

“As we transition to a single, full-time athletics director, Guilford College is in great hands with Nelson Bobb. We’re blessed with a unique opportunity to add a local and highly accomplished administrator to our team.”

“I’m ready to roll up my sleeves and go about helping Guilford College find a full-time administrator to oversee the athletics department,” Bobb said. “I want to coach coaches. I want to intermingle with the student-athletes and get their focus on the fact they are first and foremost students, and secondly athletes. What they do in the classroom is more important than what they do on the field of play, because sooner or later, they’ll hang up their cleats or sneakers.”

Bobb served as UNCG’s athletics director from 1983-2009 and developed a nationally recognized program that consistently succeeded in competition and in the classroom. He oversaw the Spartans’ transition from an eight-team Division III program into a 17-team Division I operation that competes in the Southern Conference. The move to Division I included three years in Division II. UNCG won five national titles and sent seven different teams to a combined 39 NCAA Tournament appearances under Bobb’s leadership. The Spartans also claimed 37 conference crowns, including 28 in the Division I era.

As the Spartans’ athletics department grew, so did its facilities. Bobb oversaw the construction or renovation of all UNCG athletics venues. The UNCG Soccer Stadium opened in 1991 and was converted into a 10,000-seat venue that hosted the NCAA Division I Women’s Soccer Final Four in 1997 and 1998. Baseball and softball stadiums were built on campus. The University also served as a training site for Olympic teams prior to the 1996 Summer Games in Atlanta.

Bobb was inducted into UNCG’s Hall of Fame in 1998 and the National Association of Collegiate Directors of Athletics (NACDA) Hall in 2012. He is also in the Guilford County Sports Hall of Fame and received NACDA’s 2016 Gary Cunningham Lifetime Achievement Award.

A Gahanna, Ohio, native, Bobb graduated from Kent State University in 1970 and earned a master’s degree there two years later. He was an academic and performance All-Mid-American Conference football selection for the Golden Flashes. Bobb also spent over nine years as assistant football coach and assistant athletics director at Cornell University.