HARRISONBURG, Va. – Guilford College shot a school- and tournament record 16-under-par 560 over 36 holes Monday to win the Tom Kinder Memorial men’s golf tournament. The Quakers blistered the par-72, 6,769-yard Lakeview Golf Club with rounds of 276 and 284 to outdistance the tourney’s other 14 teams by 20 strokes and win their second title in as many tournaments this season. 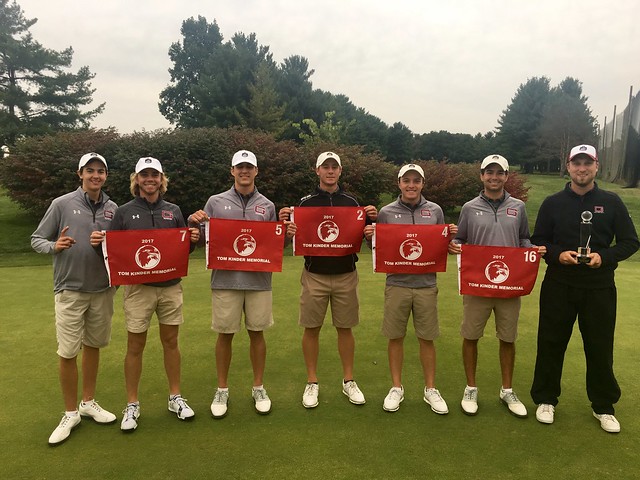 Due to weather concerns influenced by Hurricane Irma, the tournament schedule was changed from 36 holes over two days to 36 holes on one day. Guilford turned in a four-under 284 in its second round and shattered the previous 36-hole standard of 562 set at the 1997 Camp Lejeune Invitational. Hill and Kell Graham shared low honors in the second round with matching scores of three-under 69.

Hill placed second on the 90-man leaderboard with an eight-under 136, the fourth-lowest 36-hole score in Guilford history and the Quakers’ lowest since Ty Palmer’s ’17 132 at the 2014 Gordin Classic. Ferrum College’s Lance Keiser fired a 68-64-132 to claim medalist honors. Guilford’s Zachary Evens carded a 68-70-138 that placed fourth overall, one stroke better than Graham, who played 70-69-139 for the day. Senior Harrison Frye (High Point, N.C./High Point Central) provided Guilford’s fourth scores in both rounds with a 71-76-147 that shared 15th place. Rookie Jack Lee was 63rd after shooting 83-78-161 in his debut with the Quakers’ top five.

Guilford freshman Bradley Calloway (Asheboro, N.C./Wesleyan) showed well in his college debut with the highest finish (7th) among the field’s 15 individuals. He shot 73-69-142.

Coach Justin Tereshko’s Quakers now turn their attention to the Tournament Town Preview September 24-25 at the Grandover Resort in Greensboro.