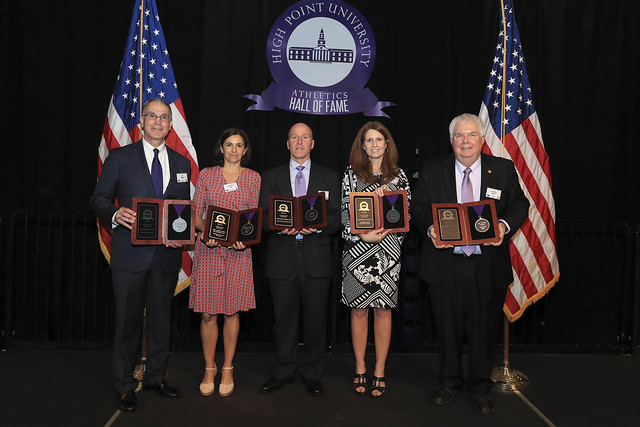 “This evening we have the privilege of inducting our five honorees, who all have helped create a championship environment and propelled the High Point University Athletic Department into the Division I era,” HPU Director of Athletics Dan Hauser said.

The event was emceed by WGHP sports anchor Kevin Connolly.

The 2019 High Point University Hall of Fame Class will be announced this fall.

Gibson started the women’s soccer program in 1992 and had an overall record of 25-26-3 in three seasons after an initial record of 2-14-1. As the men’s golf coach from 1974-92, he led the Panthers to nine top-3 spots at the Carolinas Conference and NAIA District 26 golf tournaments. The Panthers qualified for the NAIA National Tournament in 1991, placing 15th, and he was named the Carolinas Conference Coach of the Year in 1990 and 1991.

Gibson served as the HPU Director of Athletics and oversaw the Panthers transition into the Big South Conference. He served on several NCAA committees, including the chair of the Sportsmanship and Ethical Conduct committee from 2003-05. He also served as the HPU Sports Information Director from 1975-92 and while a member of the HPU faculty from 1980-2012, he created and implemented the sports management undergraduate major in 1995 and aided the creation of the sports studies graduate degree in 2000. He was named to the NAIA Hall of Fame in 2011, the Guilford County Sports Hall of Fame in 2012 and will be inducted into the North Carolina Soccer Hall of Fame on Jan. 27.

Thomas Ingram
Men’s Soccer (1987-90)
Ingram was a three-time NAIA and NSCAA All-American defender for the Panthers from 1988-90. He was named to the second teams in 1988 and 1989 before earning NAIA NSCAA All-America First-Team honors in 1990. He was a four-member of the NSCAA All-South, NAIA All-Area VII, NAIA District 26 and All-Carolinas Conference squads from 1987-90. For his efforts, the Belfast, Northern Ireland, native was selected to the 1990 East-West NAIA Senior Bowl.

Ana Maria diez de Medina
Women’s Tennis (1981-84)
Diez de Medina was a three-time NAIA All-American honorable mention for the Panthers from 1981-83. She was a four-time All-Carolinas Conference and All-NAIA District 26 honoree from 1981-84. She was named the 1983 Carolinas Conference Player of the Year and was honored with the HPC Tobias Scholar-Athlete Award in 1982. A native of Cochabamba, Boliva, diez de Medina won the Bolivian age group national championship five consecutive years.

Jim Mugele
Baseball (1975-78)
Mugele was an NAIA First-Team All-American shortstop for the Panthers in 1978. He was also named the Carolinas Conference Player of the Year in 1978 and was honored on the NAIA All-Area VII and All-North Carolina squads. He was a two-time All-Carolinas Conference and All-NAIA District 26 selection in 1977 and 1978. The Lutherville, Md., native was named an NAIA Academic All-American in 1978.

Elizabeth Young
Women’s Cross Country (1992-95)
Young led the Panthers to three consecutive conference cross country championships from 1993-95 and was the Carolinas/Virginia Athletic Conference Runner of the Year in 1995 after winning the individual championship. She was a four-time all-conference runner and helped the Panthers qualifiy for the 1993 NAIA National Cross Country Meet. The Murphy, N.C., native was also named to the 1993 All-NAIA District 26 team and was the 1992 team MVP.