Caldwell Academy (Greensboro, NC) finished its 2018 varsity baseball season as the NCISSA 2A
runner up to the defending state champion Patriots of Faith Christian (Rocky Mount, NC) at the
conclusion of a weather havocked championship game on May 22, 2018. 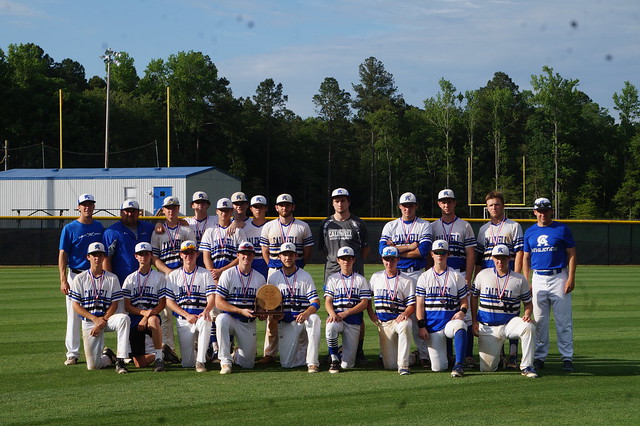 The state championship was originally scheduled to be hosted at Gaston Day School, in Gastonia, NC,
as a best two out of three series, on Friday, May 18 and Saturday, May 19. But after a week of constant
rains in the western part of the state, Gaston Day officials declared their field unplayable due to
standing water and the NCISSA had to come up with an alternate plan. That plan, after multiple
attempts to secure locations for the same days, ended as a one game, winner take all, event to be held
on Monday, May 21, at North Raleigh Christian’s field in Raleigh, NC.

Under dark clouds Caldwell’s #5 seeded Eagles played the role of visitors to the #2 seeded Patriots
but could do no damage in the top of the first. In the bottom of the frame, the Patriots’ ace and starting
pitcher, Alex Crosby, proved himself at the plate with a drive to right center to give Faith Christian a 1-0
lead. Although Eagle first baseman Cliff Helton got the first hit in the second inning, once again the
Greensboro team could not plate any runs.

In the bottom of the second, it was Faith Christian’s first baseman who got into the act, however
Chase Johnson’s line drive cleared the leftfield fence for a 2-0 lead for the home team.

Crosby continued his one-hitter through the top half of inning number three as thunder began
sounding nearby. With a Patriot on first, and Crosby back up to the plate, a flash of lightening forced a
mandatory 30 minute delay at 6:40. During the delay the skies opened up to a downpour and the
decision was made to postpone the conclusion of the game until the next day.

Tuesday morning, North Raleigh Christian’s field was found now unplayable and the game’s
location was moved to Faith’s own field in Rocky Mount, where it would restart at 2pm. While in route
to Rocky Mount, Caldwell was informed that it was raining heavily at the field, and when the Eagles
arrived that field had standing water. Once again the NCISSA had a decision to make, and the officials
decided to let the Patriots groom the field to a point where the game could be safely played.

The game resumed at 5:30, 3-1/2 hours past the scheduled restart, and with a runner on first as was
the case as the lightening halted action the evening before, Crosby once again homered and Faith had
doubled the lead to 4-0. Bowen Young, who had started both the original and resumed game for
Caldwell retired the rest of the batters that Faith sent to the plate in the lower half of the third.

Caldwell finally got on the board in the top of the fourth, as Crosby allowed two Eagle base runners
before facing Helton for the second time. Helton timed the pitcher’s first pitch fastball perfectly and
drove the ball high over the right field fence, and just like that the Eagles found themselves only down
one run, 4-3. But the in the bottom of the inning Faith got those runs back rather easily with only one
hit, but two walks, a hit batsman and two Eagle errors. 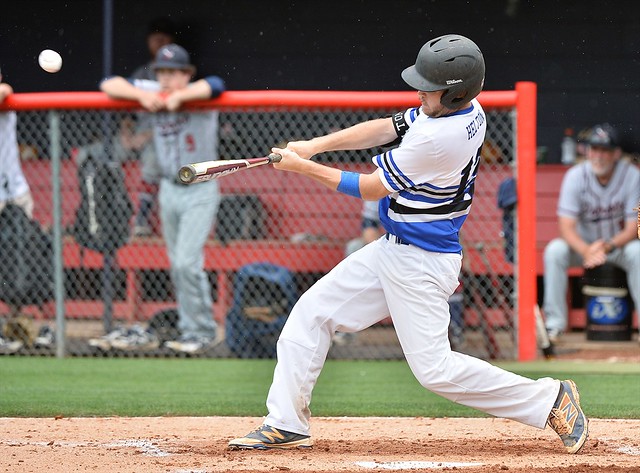 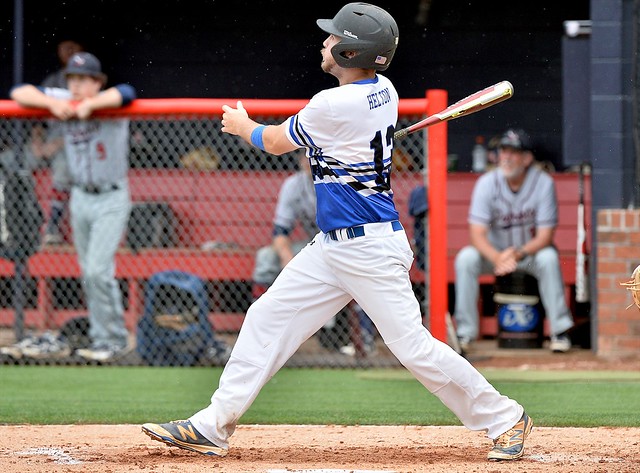 Caldwell was able to plate two more runs in the fifth on a two run blast by catcher Davis Leonard,
which took care of the scoring for the rest of the game. Both teams brought in pitching help, but it was
Faith Christian’s Sam Mills that earned the save for the Patriots on a strike out and throw out on a steal
attempt double play that ended the game.

Caldwell’s run for the NCISSA 2A championship had ended what had been an impressive run, having
beaten both the #4 seed Westchester Country Day School (High Point, NC) and the #1 seed Rocky Mount
Academy (Rocky Mount, NC) on their home fields to produce the final matchup.