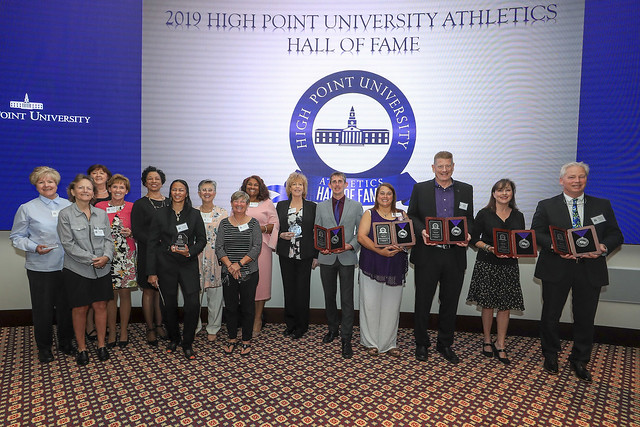 “This evening we have the privilege of inducting our five honorees, and for the first time a team, who all have helped create a championship environment and propelled the High Point University Athletic Department into the Division I era,” HPU Athletics Director Dan Hauser said.

The event was emceed by WGHP sports anchor Kevin Connolly.

The 2020 High Point University Hall of Fame Class will be announced this fall.

1977-78 Women’s Basketball Team
The Panthers captured the Association for Intercollegiate Athletics for Women (AIAW) Division II national championship on March 25, 1978. High Point College defeated South Carolina State, 92-88, in overtime in the tournament final. The Panthers won their final 20 games of the season, including the NCAIAW Division II Tournament final, the Carolinas Conference Tournament final and the AIAW Region II Championship. Marie Riley was named the national championship MVP after scoring a then-school record 42 points in the final. Riley and Ethel White were both named AIAW All-Americans for the season.

Taylor Milne – Men’s Track & Field/Cross Country (2002-05)
Milne became the first Panther to be inducted into the Big South Conference Hall of Fame in May 2018. Milne was a six-time Big South champion and eight-time all-conference honoree. He finished 13th in the NCAA Indoor Championship mile as a senior and became the first Panther to earn All-America honors in program history. Upon graduating from High Point, Milne represented his native Canada at the 2008 Beijing and 2016 Rio Olympic Games.

Paula Shelton – Women’s Soccer (1993-94)
Shelton was named an NSCAA All-American in 1993 and was selected to play in the very first NAIA Women’s East-West Senior Bowl. Shelton racked up the honors in 1993 in addition to her All-America status, being named the team most valuable player and to the NSCAA All-South, All-NAIA District 26 and All-Carolinas Conference teams.

Billy Sorrell – Baseball (1974-77)
Drafted by the Cleveland Indians after graduating high school from Andrews High School in High Point, Sorrell went on to throw 400 innings for the Panthers and accumulated a record of 39-11 with a 3.24 ERA and 304 strikeouts. He was a three-time All-Carolinas Conference honoree, a two-time All-NAIA District 26 selection and was named to the 1976 All-NAIA Area VII team.

Jim Speight – Baseball Coach (1979-2001)
Speight guided the Panthers to 467 wins over his 23-year career and led HPU into its first year at the Division I level in 2000. During his time at High Point, he coached three NAIA All-Americans, 18 NAIA All-District selections and five Major League Baseball draft picks. His HPU squad was the national runner-up in 1979 and he guided the Panthers to four Carolinas Conference titles and the 1979 NAIA District 26 and Area VII championships. Speight was named the NAIA District 26 Coach of the Year four times.

Carol Williams – Field Hockey (1982-85)
Williams played forward for the Panthers and was selected as the team most valuable player in 1985. She was a three-time First-Team All-Deep South honoree and led the team in scoring twice. Williams tallied a school-record 20 goals her junior year. She was selected for the national tournament representing the Southeast Region three times in her Panther career.