Adam Muse, a third-generation member of a legendary North Carolina coaching family, has been named interim Head Coach for the men’s varsity basketball program at East Forsyth High School. He replaces Mike Muse, who lead the Eagles to three Frank Spencer Holiday Classic tournament titles and six state 4A playoff appearances in his seven seasons in Kernersville. He is retiring as teacher/coach at the end of the month after 33 years in the Winston-Salem Forsyth County School (WSFCS) system at four different schools. 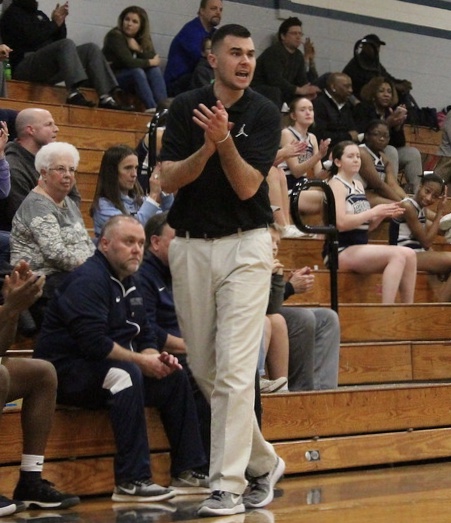 The younger Muse, son of Mount Tabor High School men’s head coach Andy Muse, has been an varsity men’s basketball assistant at East Forsyth HS for the past two seasons after serving as a graduate assistant coach at UNC Charlotte for two seasons and an assistant coach for his father at Mount Tabor in 2014-15. The 27-year old Muse is a 2010 graduate of North Forsyth HS, where he was a team captain for the Vikings’ conference championship team in his senior year. He graduated in 2014 from Appalachian State, where he was a student manager and video coordinator for the Mountaineers’ men’s basketball program.

“We’re thrilled that we had a coach with Adam’s background and resume already in our program to move into the leading role, especially with the start of the basketball season fast approaching,” said Rodney Bass, Principal at East Forsyth High School. “Anyone who follows high school basketball in our area is well aware of the long legacy of the Muse family in coaching with several schools in our district, including Adam’s dad Andy, Mike during his 33-year career as well as his grandfather Tom who won 500-plus games at Parkland High School during his Hall of Fame career.

“Adam will be named interim head coach due to the proximity of the start of practice at the end of the month, but I am confident we have the right person to lead our men’s basketball program here at East Forsyth.”

Adam Muse replaces Mike Muse, who leaves East Forsyth tied with Donnie Holt as the third-longest tenured head coach at the school (seven seasons) behind only EFHS Hall of Famers Ken Hayes (13) and Jack Blaylock (9). His record of 109-75 included Frank Spencer Championships in 2013, 2014 and 2018 and appearances in the North Carolina State 4A State Playoffs in all but one of his seasons with the Eagles. In the final game of his coaching career this July, Muse coached the West All-Stars to a 119-80 victory over the East team, one of the largest winning margins in the 70-year history of North Carolina’s annual gathering of elite prep basketball talent.

Including his tenure as a head men’s and women’s basketball coach at North Forsyth HS, Mike Muse compiled a cumulative head coaching record of 350-181 (66%). In his overall head coaching career, Muse won eight regular-season conference titles, five conference tournament titles and 18 total state playoff berths. He was selected as Coach of the Year eight times, amassed a 414-142 record in 24 seasons as a head coach in girls’ softball and was North Forsyth Teacher of the Year in 2002. Muse, a 1979 graduate of North Forsyth HS, also became the first person to both play in (1978) and serve as head coach for (2001) a Frank Spencer Holiday Classic championship team while at NFHS.

“I am extremely excited to be named the next head coach at East Forsyth High School,” said Muse, whose Eagles begin practice for the 2019-20 season next Wednesday. “I have been dreaming of this day my whole life. I’m very fortunate to have the opportunity to be the head coach at a great school with a program who has outstanding athletes with high character. We plan to build on the culture that Mike has established over the past seven years and take our program to the next level.

“Our ultimate goal is to win the 4A Central Piedmont Conference each year, go deep into the playoffs, and eventually win a State Championship! We also want our players leaving our program with the tools to be successful in life.
I wouldn’t be in the position I am today without God, my family, and other great mentors. Growing up in the gym and eventually coaching with my granddad, dad, and uncle is something I will always treasure.

“Those experiences alone have given me the blueprint of how to run a program and help kids become successful in life. I have also been fortunate to have worked at the college level under Jason Capel at Appalachian State, Mark Price at UNC Charlotte, along with many great assistant coaches who are all over the country. Each of those experiences have had a huge impact on shaping my philosophy on how to run a basketball program.

“I’m very appreciative of Mr. Bass and Coach (Allen) Plaster (East Forsyth Athletic Director) for having the confidence in me to run this top notched program. I’m excited and optimistic about the group of kids returning this season and can’t wait to hit the ground running.”

Mike Muse, a 1985 graduate of Appalachian State, coached at four WSFC schools (R.J. Reynolds, North Forsyth, Mount Tabor and East Forsyth) during his career and also served as Director of Basketball Operations and Assistant Coach at Wake Forest University (2006-09) for the late Skip Prosser and Dino Gaudio, a period during which the Deacons posted a 59-34 overall record, were ranked #1 in the Associated Press polls for a period of weeks in 2008-09 and made two NCAA Tournament appearances.

“Teaching and coaching has been at the center of my life for over three decades and I’ve had the pleasure of working beside some of the most inspirational people a person could want to be associated with in their life,” said Muse. “It’s been a great ride and I will cherish the memories. I hope I had an impact on every student, player and coach at every stop along the way during my time in both the high school ranks and in college at Appalachian State and Wake Forest. All the blessings go to God for the many opportunities and relationships that I’ve made over these years.

“Not many people in coaching get the opportunity to win their final game but my experience in this summer’s East-West All-Star game –with my entire family and closest friends there in the Greensboro Coliseum where I’ve had so many great memories—is an experience I will savor for the rest of my life. Adam is one of the brightest young coaching minds I know. His priorities are right personally and his relationships extend deep into the prep and college basketball world. The East Forsyth basketball program is in great hands this year and in future seasons with him in charge of the program.”