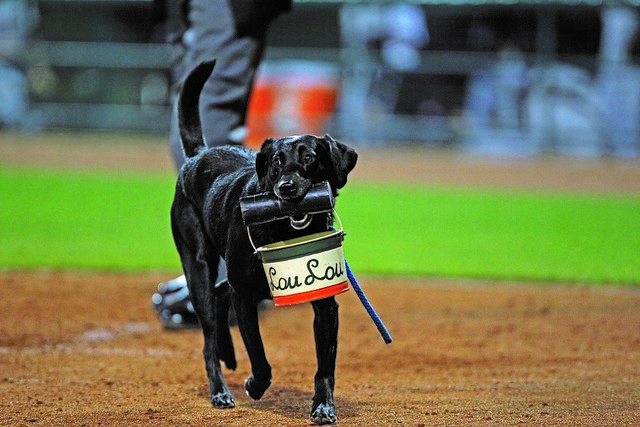 Lou Lou served as a bat and ball girl alongside Miss Babe Ruth from 2012- 2015, then by herself through the next 4 seasons. “This is a heart-breaking loss for our organization, our fans, and the Greensboro community,” said Grasshoppers President and General Manager Donald Moore. “Lou Lou was adored by our fans and loved retrieving bats and balls. We are deeply saddened by her death.”

Lou Lou’s popularity – along with her late aunt Babe and uncle Master Yogi Berra –provided entertainment at Grasshoppers games for almost 14 years and created an atmosphere unlike any other in Minor League Baseball. She is survived by her half-sister, Little Jackie Robinson, her Greensboro Grasshoppers front office staff, and millions of Grasshoppers fans she entertained over the years.

When Lou Lou was not working at the ballpark, she loved fetching her Dad’s morning newspaper, playing frisbee at home or at her favorite spot, early mornings on the beach, and being a very loving dog to her family. She had a heart of gold.

Memorial contributions can be made to Greensboro Grasshoppers Charities, c/o the Community Foundation of Greater Greensboro, 330 South Greene Street, Suite 100, Greensboro, NC 27401. Funds from these donations will go toward a soon-to-be-unveiled memorial of all three Grasshoppers’ dogs at First National Bank Field.

Terrible news for anyone who likes to go out to the old ballgame in @greensborocity. By its very nature, a ballpark is a happy place. Babe, Yogi and Lou Lou made our city's ballpark even happier. Thanks to @GSOHoppers for sharing their joy for 14 years. https://t.co/kLhhmRYmw9