(LITTLE ROCK, Ark.) – The Jackson T. Stephens Cup (The Stephens Cup), a national college golf tournament, will debut October 17-20, 2021, with the goal of featuring one of the strongest fields in collegiate golf. Named in honor of the late Augusta National Chairman, Jackson (Jack) T. Stephens, the inaugural Stephens Cup will be played at The Alotian Club in Roland, Ark. The 2022 tournament will be held at Seminole Golf Club, in Juno Beach, Fla., followed by the Trinity Forest Golf Club, in Dallas, Texas in 2023.

The Stephens Cup field will feature seven of the top NCAA Division I men’s and women’s teams in the country, with an eighth team in each group competing at the invitation of the host club. For the inaugural tournament, a selection committee will invite the teams by the end of 2020. For subsequent tournaments, invitations will be determined through a unique Stephens Cup ranking based on the Golfweek collegiate and GolfStat rankings.

“Our goal is to create a distinctive and highly-competitive collegiate tournament that is comprised of tomorrow’s PGA TOUR and LPGA stars playing some of the country’s premier golf courses,” said tournament chairman Warren Stephens. “Dad truly believed that golf instilled life lessons and built character, especially when started young. Therefore, he would be very humbled and proud that this tournament is named in his honor.”

The Alotian Club, a 2004 Tom Fazio design, is ranked No. 31 on the Golf Digest “America’s 100 Greatest Golf Courses” list and is ranked 14th on Golfweek’s Best list of the top 200 modern courses in the country. The Alotian Club has a history of supporting amateur golf, hosting the Western Amateur in 2013 and the Arnold Palmer Cup in 2019.

The iconic Seminole Golf Club is located on the Atlantic coast in Juno Fla., just north of West Palm Beach and is considered by many the best layout ever designed by the legendary Donald Ross. Trinity Forest Golf Club is a Bill Coore-Ben Crenshaw design located in Dallas. It previously hosted the PGA TOUR’s AT&T Byron Nelson and is the home course for Southern Methodist University. Trinity Forest is a links-style layout built in the middle of the Great Trinity Forest.

“Having spent my entire career in golf, whether working with PGA TOUR pros at the Wyndham Championship or the future stars at AJGA, it is clear we are creating something very special with the Stephens Cup,” tournament director Mark Brazil said. “Our goal is to create an event that will be played at world-class venues; an event that will be foundational in college and amateur golf. In short, an event worthy of its namesake.” 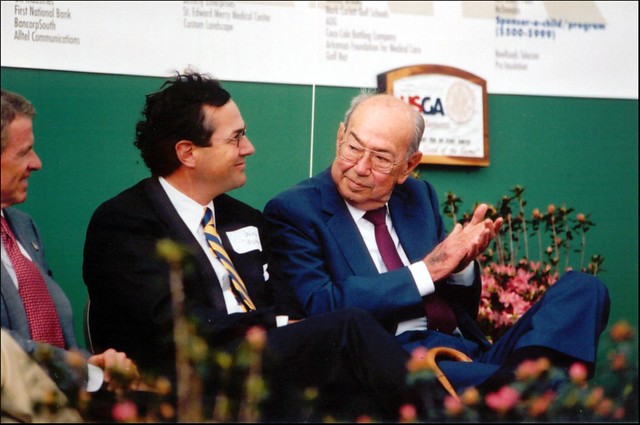