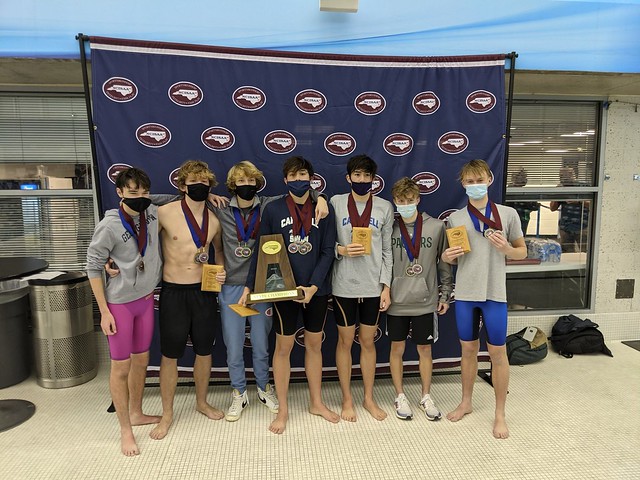 The boys swimming team from Caldwell Academy won the NCISAA 3A 2021 STATE CHAMPIONSHIPS with a score of 285, 7 points better than the 2nd palace team Wayne Country Day School from Goldsboro. A total of 20 teams competed in this division. 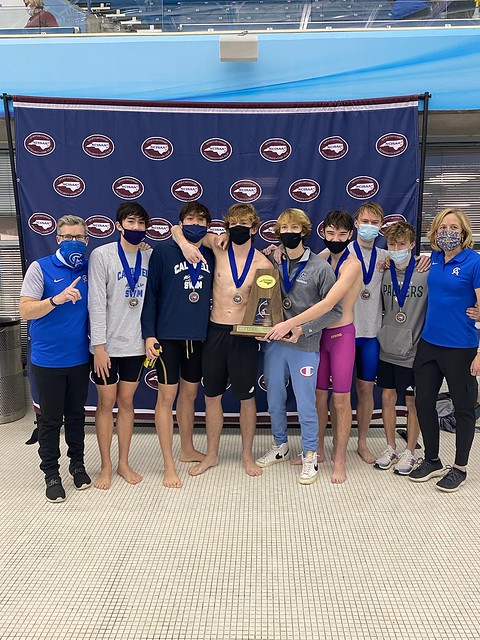 More details coming in later on tonight, from Dave Walters and Bob Black…
The NCISAA DIVISION III State swim meet was held at the GAC on Wednesday & the Caldwell Boys Swim Team won the STATE CHAMPIONSHIP
in DIVISION III, in the NCISAA.. Twenty teams competed in the BOYS DIVISION and we finished seven ( 7 ) points ahead of the 2nd place team,
Wayne Country Day School from Goldsboro. It was our first boys swim championship since 2011

A BIG SHOUT out goes to our coaches for an outstanding season & a job well done ,,, Matt Clancy & Frances Taylor.

1. The girls team placed 11th out of 22 team with only 7 members on the team & the oldest being only a Freshman.

2. Reece Ramseur set a school record in the 100 butterfly with a time of 1:00.23 good for 2nd place. This is the second time this year she has broken her own record..

6. The last event of the BOYS MEET, the 400 YD FREESTYLE RELAY was going to decide who won the STATE CHAMPIONSHIP.
Caldwell’s Team, Parker Smith,, Noah Ramos,, Kieran Mohorn & John Ramos , swam it in a school record breaking
. time of 3:28.76 STATE CHAMPS as a result…