Pawlowski one of 10 candidates for NCAA DIII Collge Football Player of the Year…Voting ends December 8 and CLICK HERE to see how to vote and to cast your vote for Matty P. from NWG….(Northwest Guilford High School/Guilford College) 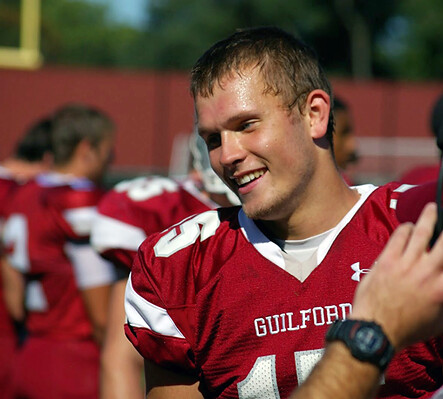 Led Division III in passing touchdowns (38) and was second in both passing yards (3,476) and points responsible for (236) … was sixth in passing efficiency (179.2) and seventh in completions per game (25.0 per game) … set schools records for passing touchdowns (38) and completion percentage (.678) in a season … volunteers weekly during the offseason mentoring students with academic or behavioral challenges … also served as a motivational speaker to local youth teams.

Guilford College junior Matt Pawlowski has been selected as one of 10 finalists for the 2014 Gagliardi Trophy, awarded to NCAA Division III’s most outstanding football player. The J-Club of Saint John’s University of Minnesota, which presents the annual prize along with Jostens, announced the finalists Monday.

Pawlowski and the remaining finalists were chosen by the J-Club’s Board of Directors and advance to a national ballot. A selection committee comprised of media, coaches and former Division III football standouts will select the winner, which will be announced Dec. 17 in Salem, Virginia, prior to the 2014 Stagg Bowl, NCAA Division III’s Championship game. Division III football fans can also participate in on-line voting at www.d3football.com. On Dec. 9, the J-Club will identify four finalists invited to the announcement ceremony.

Pawlowski recently completed one of the finest football seasons in Guilford history. The 6-2, 190-pound junior quarterback led the nation after the regular season with a school-record 38 touchdown passes. He completed a school-record 67.8% of his throws, Division III’s 11th-best figure. Pawlowski connected on 250-of-369 passes for 3,476 yards with just three interceptions. Through games of Nov. 15, Pawlowski ranked second in Division III in passing yards, passing yards per game (347.6), and points responsible for (236). He was third with 372.1 total offensive yards per game, also a school standard, and seventh with 25 completions per game. Pawlowski’s school-record pass efficiency rating (179.24) ranked sixth nationally.

Pawlowski received the Old Dominion Athletic Conference’s (ODAC) Offensive Player of the Week Award three times this season, which gives him eight career weekly honors. He picked it up after throwing for 418 yards and a career-high six scores in the Quakers’ 52-28 win over Methodist University. His 394-yard, four-touchdown passing effort the following week against Southern Virginia University netted his second league prize. Pawlowski completed 38-of-48 passes for 389 yards and five scores in Guilford’s season finale, a 52-28 victory at Emory & Henry College. The win clinched a share of first place in the ODAC standings and helped Guilford match the school-record for wins (8) in a season. Pawlowski passed for a career-high 460 yards, fourth-best in school history, in an Oct. 11 loss at Shenandoah University. It was one of his eight games with 300 or more passing yards and three or more passing touchdowns. Twice Pawlowski earned honorable mention Offensive Player of the Week recognition from USA College Football.

Through three seasons, Pawlowski stands second to former NCAA Division III passing yardage leader Josh Vogelbach ’09 in most of Guilford’s career passing categories. The three-year starter has completed 645-of-1,019 passes for 8,292 yards and 77 scores with 14 interceptions. Over the past two years, Pawlowski has passed for 5,849 yards with 62 touchdowns and only six interceptions.

In addition to his athletic prowess, Pawlowski is an honor roll student at Guilford and majors in sport management. He has also participated in a number of Guilford’s community service initiatives, including the team’s New Student Move-In Day. Pawlowski has also mentored students at Guilford Middle School for each of the past two seasons. He and teammate Mitch Ferrick own and operate the Air Raid Training Academy, a program established to train youth and high school quarterbacks.

Coach Chris Rusiewicz’s Quakers posted the school’s sixth 8-2 record in school history and its first share of the ODAC’s top spot since 1997. Guilford set or tied nine team and individual school records, including points in a season (407).

Sponsored by Jostens and the J-Club, the Gagliardi Trophy recognizes excellence in athletics, academics and community service. Launched in 1993, the award is named after John Gagliardi, Saint John’s legendary Hall of Fame head football coach who retired in November 2012 with 489 career victories, the most in college football history. The trophy design features a sculpture of Gagliardi and a player representing the teacher-coach and the student-athlete in a classic one-on-one sideline consultation. Hand-cast in bronze on a polished wood base, the trophy stands nearly two feet tall and weighs 64 pounds. The words “Division III Player of the Year” and “Honoring Excellence in Football, Academics and Community Service” are etched in glass on two panels flanking the figures. Quarterback Kevin Burke from the University of Mount Union was the 2013 Gagliardi Trophy winner.