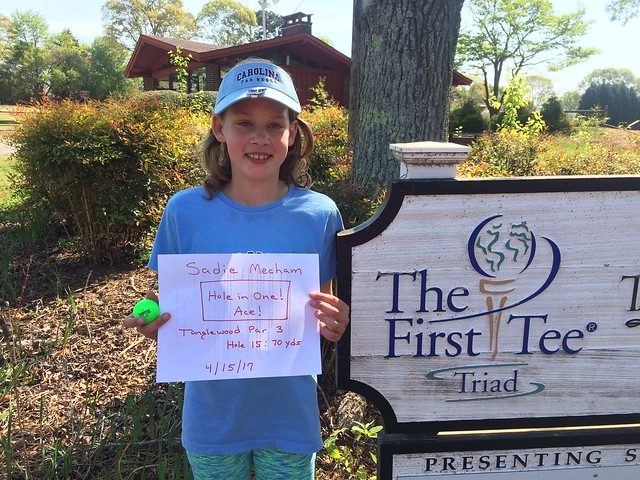 Mecham, 10, and her family moved to the Piedmont Triad from Harrisonburg, Va., last summer. She started playing golf four years ago and quickly fell in love with the sport. After starting with the First Tee of Harrisonburg, she currently participates in the “Par” Program, the second of five levels of achievement within The First Tee programming: PLAYer, Par, Birdie, Eagle and Ace. Mecham is a regular participant in the Tanglewood Park Par-3 Series which is specifically designed to introduce young golfers of all skill levels to on-course play and competitive golf.

“I love The First Tee because it has so many things to offer,” Sadie’s father Brad Mecham said. “You just have to be willing to have fun; it was all about the basics for us at first. With The First Tee of Harrisonburg, we practiced a lot. Sadie told me the other day, ‘Golf in North Carolina is a lot more fun than in Virginia because here we get to play a lot more instead of just practicing.’ The First Tee is a great way to have fun and compete at the same time.”

Sadie Mecham finished second in last fall’s Tanglewood Par-3 Series and is back for a second run this spring. On a recent Saturday at Tanglewood, Mecham, who is a fourth grader at Whitaker Elementary School in Winston-Salem, played the 70-yard, uphill par-three 15th hole with an eight iron. She knew it was a great shot, but she didn’t know it was a hole-in-one until they found the ball at the bottom of the cup.

“Wow! I got a hole-in-one,” Sadie said after realizing. “It was neat to be there with my Dad because we could talk about it and celebrate together.”

“The green is elevated so we didn’t see it go in, but I knew it was a great shot when she hit it. When we got up there, one of the parents said, ‘I think it’s in the hole!’ Sadie was really quite speechless; we both kept smiling for the rest of the round.”

The First Tee of the Triad offers programming in elementary schools as well as after-school programming at its 18 Piedmont Triad locations. The Piedmont Triad affiliate encourages its students to take advantage of opportunities to play golf in programs like the Tanglewood Park Par-3 Series and its series of summer tournaments. Mecham will compete in six First Tee events this summer.

“Our programs teach kids life skills through golf, but we’re also teaching them how to play this great sport,” The First Tee of the Triad CEO Mike Barber said. “We can teach kids how to hit balls on the practice range, but it’s vital that they take what we teach them on the range and apply it to playing the game on the course. That’s why we offer so many playing opportunities – so our students can begin to understand how to play the game. And actually playing the game also provides countless chances for them to exhibit the life skills they’ve learned in our classes such as honesty, integrity, sportsmanship and courtesy among others.”

About The First Tee:
The First Tee, an initiative of the World Golf Foundation, has as its mission, “To impact the lives of young people by providing educational programs that build, instill life-enhancing values and promote healthy choices through the game of golf.” The goal of The First Tee is to provide the golf-learning facilities and the experience that will enable kids from every walk of life to partake of a game that teaches values for life and which can be played for a lifetime. Founded by the World Golf Foundation in 1997, The First Tee is a way to bring golf to children that otherwise would not be exposed to the game or its positive values. The program is overseen and has the active support of committee members representing Augusta National Golf Club, the Ladies Professional Golf Association, PGA of America, PGA TOUR and the United States Golf Association. Former President George W. Bush serves as Honorary Chairman; he succeeds his father, former president George H.W. Bush, who served as The First Tee’s Honorary Chairman since the organization’s inception in 1997 and now serves as the Honorary Chair Emeritus.