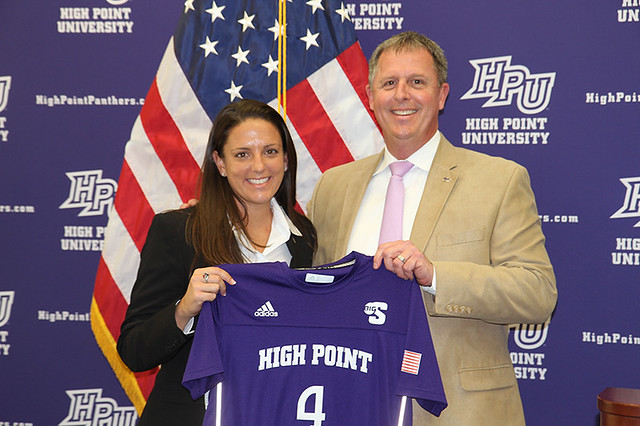 Fontaine, who becomes the sixth head coach in program history, has been with High Point for nine seasons since 2009. She was an assistant coach at HPU from 2009-2012 before being elevated to associate head coach in 2013 and serving in that capacity for the past five years.

“Brandi has poured her heart into the High Point University women’s soccer program over the past nine years and I’m thrilled to welcome her as the next head coach,” Hauser said. “She has experience building multiple conference championship teams over her career and I’m confident Brandi has the passion and vision to advance HPU to national prominence.”

The upcoming season will signify Fontaine’s 10th on campus, which accounts for half of the program’s existence at the Division I level (since 1999). She will be the fourth women’s soccer head coach since the move to Div. I.

In her nine seasons, High Point has accumulated 95 wins and posted a .549 overall winning percentage, by far the best in program history. The Purple & White have won 57 Big South games with a .710 winning percentage, claiming four regular season titles and four tournament championships. Fontaine has been a part of the coaching staff for four of HPU’s six trips to the NCAA Tournament.

“I would like to thank President Nido Qubein and Dan Hauser for giving me the opportunity to continue being a part of this extraordinary university,” Fontaine said. “I love High Point University and the amazing culture that has been established by Dr. Qubein. I am honored and grateful to have the opportunity to build off the strong foundation that has been established.

“My staff and I will work tirelessly to take this program to greater heights as we look to chase more championships and compete at the national level.”

Under Fontaine’s watch, HPU has set numerous program records, including a school-best 13 wins in each of the last two seasons. High Point won the regular season and tournament championships in the same season for just the second time in program history in 2017.

High Point has held at least a .500 mark in conference play in each of Fontaine’s nine seasons on campus. The Panthers are coming off consecutive regular season championships for the first time in school history and have won at least 12 games each of the last four years after doing so just twice in the program’s previous 22 campaigns (none since 1995).

As part of her duties as associate head coach, Fontaine was the team’s recruiting coordinator. The Panthers boasted 46 All-Conference performers under her watch including 19 first-team honorees. Fontaine helped recruit Alex Hank, the 2015 Big South Defensive Player of the Year, Kelsey Perrell, the 2016 Big South Attacking Player of the Year, and Becca Rolfe, who became the first Panther to be named all-conference in each of her four seasons on campus.

High Point has also taken care of business in the classroom during Fontaine’s tenure, routinely holding the highest team GPA of the 16 sports on campus. The team recorded a 3.55 GPA in the 2017 fall semester with seven players toting a perfect 4.0. The Panthers have had four players named Big South Scholar Athlete of the Year in Fontaine’s nine years.

Fontaine started her coaching career as an assistant coach for one season at her alma mater, Francis Marion University, in 2008. A three-year letterwinner for the Patriots, Fontaine (formerly Sutphin) battled injuries but still played in 33 career matches with 20 starts, recording three goals and 11 assists. She served as team captain during her senior season and ranked in the top 25 in the nation in assists as a junior.

Fontaine began her collegiate playing career at West Virginia University, playing in five games as a freshman for a Mountaineer squad that went 15-6-0 and advanced to the second round of the NCAA Tournament.

Fontaine earned her bachelor’s degree in mass communication from Francis Marion in December of 2007 and a Master of Science degree in Sports Management from American Public University in 2010.

A native of Davidsonville, Md., Fontaine is a product of South River High School located in Edgewater, Md. As a prep performer at SRHS, Fontaine garnered 2002 first-team All-State, All-Region and All-South accolades. She finished her prep career with 24 goals and 28 assists. Fontaine was also a member of the Crofton United club team.

She holds an Premier Diploma from the United Soccer Coaches Association and is an Assistant Director of Coaching at the Piedmont Triad Football Club. She also coaches the five-time NC State Cup Champions of which seven players have been recruited to play at HPU.

Fontaine married her husband, Keith, in the summer of 2008. The two have a son, Kaden, who was born in 2012. Fontaine’s twin sister, Jacque Sutphin, also played at FMU and was a graduate assistant women’s soccer coach for the Citadel in 2008.

BRANDI FONTAINE SNAPSHOT
• Sixth head coach in program history, fourth in the Div. I era.
• Assistant coach at HPU from 2009-12 before being promoted to associate head coach for 2013-17
• Compiled a 95-76-24 (.549) overall record and a 57-20-11 (.710) mark in Big South play
• Helped guide the Panthers to four regular season championships and four tournament championships, advancing to the NCAA Tournament four times
• Coordinator for the recruiting of 38 All-Conference performers including a Big South Offensive Player of the Year and a Big South Defensive Player of the Year
• Part of a coaching staff that has reset the program record for wins in a season (13, twice), conference wins in a season (8, 2012), and longest winning streak (7, 2017)

“High Point has made an incredible decision with the promotion of Brandi Fontaine to Head Coach. This promotion makes it clear that student-athlete well-being is a top priority for their university. I have known and coached with Brandi over the last 7 years and have the utmost respect for her as a person; as well as a coach. Brandi is a great coach and will continue to be an unbelievable mentor to the student-athletes. High Point women’s soccer has an impressive history of championships in the Big South Conference and by providing the continuity of staff they will continue to excel. Congrats to Brandi, to the program and to the administration on an impressive hire.” – Sarah Strickland, Head Coach, Appalachian State University

“Brandi Fontaine has established herself as one of the most committed young coaches in our field with an enduring determination and a player-centered focus. Coach Fontaine will undoubtedly seize this opportunity that HPU has so wisely presented to her.” – Jay Golomb, United Soccer Coaches National Staff & State Director – Florida