“Tubby Smith is a nationally admired, transformational coach whose career brings honor to his alma mater as a distinguished alumnus,” Qubein said. “HPU’s path of excellence anchored by stellar faculty, innovative academic programs, new schools, and teaching facilities is leading the way towards a promising future for students from all over the world. We are excited to welcome both Tubby and Donna back home to HPU.” 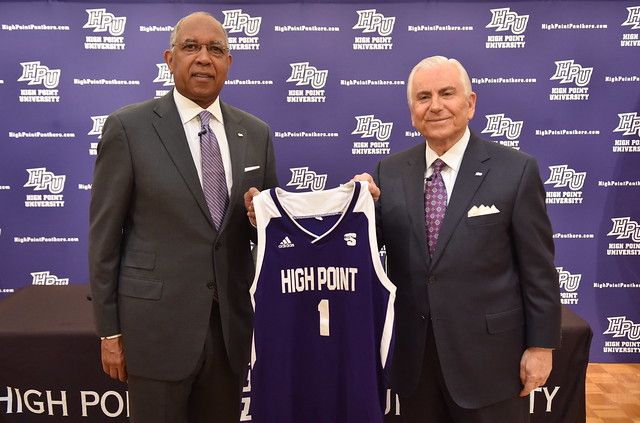 “It is a great honor and privilege to return to my alma mater as the next head basketball coach at High Point University,” Smith said. “My wife, Donna, and I have been very impressed with the transformation the University has taken under the leadership of Dr. Nido Qubein and look forward to coming back to a place so near and dear to our hearts.”

The $130 million Qubein Arena, Conference Center and Hotel will be located along Lexington Avenue between Panther Drive and University Parkway, allowing the central campus to continue to be the main hub of activity for students, staff, faculty and the community. The university owns all land associated with the site.

“High Point University continues to grow in impactful ways, and these facilities will benefit both HPU and the city of High Point measurably for generations to come,” Qubein said.

The Nido and Mariana Qubein Arena, Conference Center and Hotel will become the home of HPU’s men’s and women’s basketball programs, as well as a venue for major events, speakers, concerts, entertainment, academic symposia, and recreational activities.

About Tubby Smith:
Smith, who becomes the 12th head men’s basketball coach in HPU history, joins the Panthers after serving as the head coach at Memphis for two seasons. An all-conference standout for High Point College from 1969-73, Smith coached Kentucky to the 1998 national championship and is one of two head coaches to guide five different programs to the NCAA Division I Tournament (Tulsa, Georgia, Kentucky, Minnesota and Texas Tech).

Smith has made 20 postseason appearances as a head coach, including nine Sweet Sixteen and four Elite Eight trips. Smith has mentored 18 student-athletes who have gone on to play in the NBA, including 13 NBA draft picks. In 27 seasons at six schools, Smith has amassed a combined record of 597-302 (.664).

Smith, a native of Scotland, Md., started his coaching career at Great Mills High School, his high school alma mater, in Great Mills, Md., before moving to Hoke County High School in Raeford, N.C. He had three assistant coach stops at VCU, South Carolina and Kentucky before earning his first Division I head coaching job at Tulsa in 1991.

Smith led Tulsa to a pair of Sweet Sixteen appearances in 1994 and 1995 before moving to Georgia where he accumulated a 45-19 record in two seasons. In 1997, Smith went back to Kentucky, this time as the head coach, and led the Wildcats to the 1998 national championship. He secured a 262-83 record with five Sweet Sixteen trips and 10 NCAA Tournament appearances in 10 seasons.

Smith also was the head coach at Minnesota for six seasons and turned around a fledgling program at Texas Tech in three seasons before moving to Memphis in 2016.

Smith comes to High Point University in a time of great transformation. Since 2005, enrollment has more than tripled and grown from three to eight academic schools. The US. News & World Report ranked HPU the Best College and the Most Innovative College in the South and the Princeton Review included HPU among its Best 382 Colleges in the Nation.

Inside the Qubein Arena, Conference Center and Hotel will be the Tubby and Donna Smith Court, a symbol of the Smith family’s generosity and stewardship to the University.