His sisters often times were out in front leading the parade, but with sisters like Kay Yow, Debbie Yow, and Susan Yow, how could you not get left behind on occasion when the sports circus parade came rolling through town…

You had Kay Yow and Debbie Yow, excelling at East Carolina and then Susan Yow excelling at Elon, before she transferred to N.C. State, where she would play college basketball for her legendary sister Kay Yow…Later on Debbie Yow would become the athletic director at the Yow family’s beloved N.C. State…Debbie also spent some time at Kentucky, UNCG, Maryland and I think she might have done college time at East Carolina too….

The Yow sisters did it all in volleyball, basketball and softball and the whole ‘Yow Story’ got it’s start down at the old Gibsonville High School, home of the Yellow Jackets…

The Yow sisters were the “talk of the town” down in Gibsonville, but as the story goes, and this part is really, “The Rest of the Story”, and the truth can be told and this story never gets old, the Yow Sisters had a brother too…

His name was Ronnie Yow and he was a pretty good football player for the old Gibsonville Yellow Jackets, good enough to earn a college scholarship to Clemson University…Ronnie’s dad Hilton Yow, who was a shift manager at Lorillard Tobacco Company in Greensboro, well Hilton put together some real neat video(probably 16 millimeter film back in those days) with Ronnie playing wide receiver, and he sent it down to Clemson and the Tigers liked what they saw and they gave Ronnie Yow that football scholarship back in the late 1960’s….

Ronnie at one time was a world traveler and this all took place after his time spent down in Clemson, South Carolina….

Ronnie Yow was a collector of fine art and antique pieces, and this led to his creation of the North Carolina Historic and Preservation Company and Ronnie Yow’s company would go about restoring old historic homes and buildings..It was at this craft where I first met Ronnie Yow and learned that he was a big follower and regular reader of GreensboroSports.com….

He wanted to show me what type of work his company(the North Carolina Historic and Preservation Company) was doing….I climbed up on top of some houses with Ronnie Yow, and I started to wonder if I had done enough to preserve my own body over the years…Climbing around those old creaky houses was eye-opening, and I also got to hear some of the good Ronnie Yow, Kay Yow, Debbie Yow, and Susan Yow sports stories from over the years….

We open up the Ronnie Yow book here today and we close the book on Ronnie Yow’s life, all in the same text….

At 70 years old Ronnie Yow has left us, and for his love of GreensboroSports.com, we remember him here today…

Being the brother of Kay Yow, Debbie Yow, and Susan Yow, that is not a bad thing at all…And here is how Ronnie Yow is being remembered by way of his obituary in today’s New and Record, and I hope we have shared a few of his good memories here in our early Thursday morning post here at this site, GreensboroSports.com… 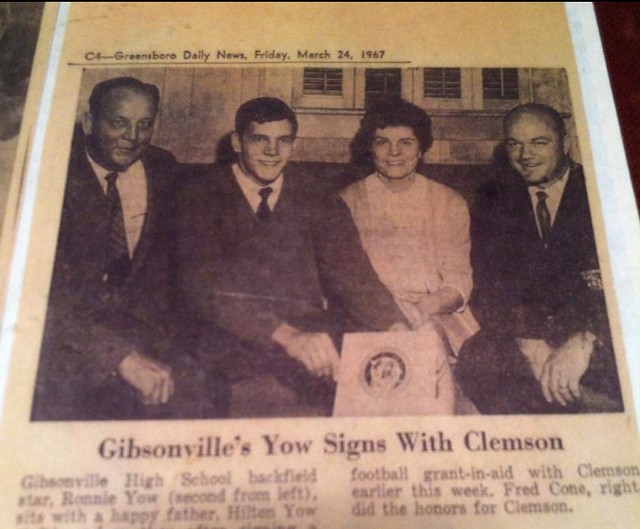 He was born on February 4th, 1949 to Hilton Lee Yow and Cora Elizabeth Scoggins Yow. Age 70, he died on Saturday, January 19th at Beacon Place Hospice of Greensboro, after a courageous and inspiring battle with cancer. He was our beloved father, grandfather, brother, husband, mentor, boss, and friend. He grew up in the small town of Gibsonville, North Carolina, the second of four children, surrounded by an extended family and many friends. He graduated from Gibsonville High School in 1967 where he was a tri-sport athlete in football-basketball-track & field. Upon high school graduation, he signed a full grant-in-aid to play football at Clemson University where he was a tight end/wide receiver. He traveled extensively in Europe and India as a young man. He married twice, first to Nancy Doyle Yow of Bethesda, Maryland, and in 1977, Jason Andrew Yow was born. Later in life, he married Sandra Coldiron Yow of Greensboro, and in 1986, Zachary Lee Yow was born, then in 1990, James Dylan Yow was born. Ronnie became stepfather to Kyle and his son Shawn Bray, whose fiancée is Leah Harker. Thirty years ago, he established North Carolina Historic Restoration and Preservation, Inc. He and his team were responsible for masterfully restoring and beautifying many fine old homes and buildings in Greensboro, Old Salem, Charleston, SC, and Nantucket, MA. He was preceded in death by his parents, and by his sister, Sandra Kay Yow. He is survived by his sisters, Susan Lee Yow of Charlotte, NC, and Dr. Deborah Ann Yow Bowden and her husband Dr. William B. Bowden of Cary, NC. His sons Jason Andrew Yow, Zachary Lee Yow and wife Niki LeFaive Yow, Dylan James Yow and wife Rebecca Balabanis Yow, all of Greensboro. His granddaughters, the loves of his life, Isabelle Kay Yow, Savannah Lee Michelle Yow, Sophia Grace Yow, and Aleah Faith Yow, all of Greensboro. Step-grandchildren are Alaina Marie Bray and Adam Warner Perdue. A memorial service will be held on Saturday, January 25 from 11 until 12 at Trinity Church, 5200 West Friendly Avenue, Greensboro, NC 27410. Following the service, a reception will be held at 1401 Westminster Drive, Greensboro. In lieu of flowers, donations may be made to the Kay Yow Cancer Fund, or to Hospice and Palliative Care of Greensboro. Triad Cremation and Funeral Service 2110 Veasley Street, Greensboro, NC 27407

Taking a ride with Ronnie Yow
Posted by Andy Durham on February 5, 2009 at 3:06 pm under College, High School, Professional | 2 Comments to Read | Edit

I spent about three hours riding and talking yesterday with Ronnie Yow, the brother of Kay Yow, who passed away about two weeks ago.

We talked about his sister and the influence she had on the people she came in contact with. We also got the chance to discuss the other Yow girls Debbie and Susan. Debbie, the athletic director at Maryland and Susan, the head women’s basketball coach at Belmont Abbey.

I also got the scoop on the Clemson Tiger football team and their beloved football coach Frank Howard and his affection for orange football shoes when the Tigers played the N.C. State white-shoes bunch back in the late 60’s…..

Every Yow has the old know-how

At this stage of the season there seems to be a very good chance that the No. 1 women’s team in North Carolina will be North Carolina State. Its coach? Kay Yow. In the AIAW Southern Regional playoffs, State is likely to meet the University of Kentucky. Its coach? Debbie Yow. Odds would seem to favor State, if only because of Kay Yow’s assistant coach. And who is that? Susan Yow.